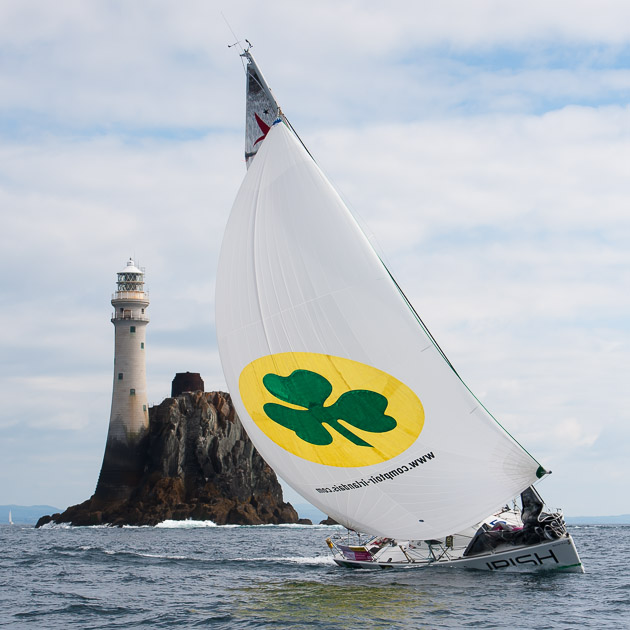 The rounding of the Rock. Picture Robert Bateman

Yann Elies (Groupe Queguiner) rounded the Fastnet Rock in first place at 1004BST this morning. The two-time Solitaire winner was eight minutes ahead of Gildas Mahe (Interface Concept) in second and ten minutes ahead of Jeremie Beyou (Maitre Coq) in third. It had been a tough night for the solo sailors as they had to cope with long periods of very little or no wind but at Fastnet there was more wind than they had been expecting. The whole fleet was now within 6nm as they raced straight from Fastnet to Roscoff.

The leading sailors were some 15nm from the Stags south cardinal buoy at 0400BST when the wind died, and the fleet was becalmed. Yann Elies (Groupe Queguiner) was able to hold on to his lead but the gap between the first and last boat halved, from 14nm yesterday morning to 7nm today. Adrien Hardy (Agir Recouvrement) was able to capitalise on this, climbing from 17th to 5th position.

After rounding the Stags mark the fleet raced 12nm along the Irish coast to Fastnet. Gybing South early paid off for Sam Goodchild (Team Plymouth), with 6nm to Fastnet Rock he was doing around 2kn more than the majority of the fleet following the Irish coastline. In forty five minutes Goodchild had climbed six places from 29th to 23rd, by the time he reached Fastnet he was in 21st. It was rookie, Richard Mason (Artemis 77), who was the first Brit to round the rock. Mason passed the iconic lighthouse in 20th, 24 minutes behind Elies.

With all the solo sailors within an hour of each other it is still all to play for. Henry Bomby (Red) is hoping to climb a few places before the Roscoff arrival. He said “I’m fine, I’ve got quite a lot of work to do before I get to Roscoff. The time difference between first and last isn’t much. We’ve had less bad wind than we’d been expecting and we’ve had flat seas. Rounding Fastnet Rock was good, it’s pretty impressive and iconic. The flat seas are really helping me in terms of eating and sleeping. Now it’s pretty much the same angle the whole way to Roscoff. I can see everyone in the fleet, we’re in a straight line”

This afternoon the fleet had 8kn of NE’ly wind and at that stage it was expected the Solitaire sailors should arrive in Roscoff late tomorrow (Tuesday) night. 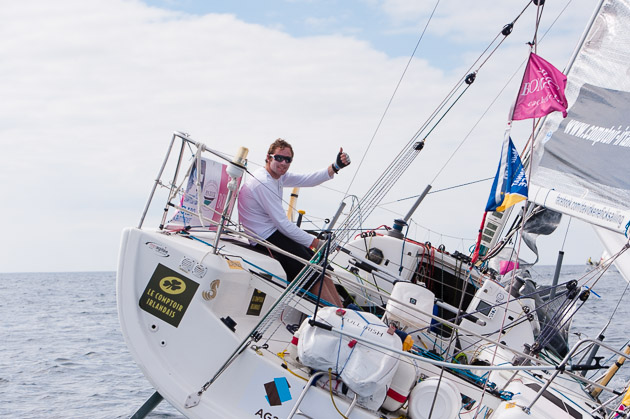 However, as with most stories, there is also an emotional side attached and in this story the day belonged to David Kenefick rounding the Fastnet Rock watched by his Dad, Neil, and brother George, who had earlier returned from participating in the ICRA National Championships in Dublin where they raised a substantial amount of money for the Nathan Kirwan Trust. Their next task was to establish with, whatever degree of certainty they could, an approximate time for the rock rounding. First this was believed to be around midnight, this then changed to 4 a.m. and finally it was 6am before the RIB took off from Baltimore. This time the merry band had two additional passengers, 420 sailor young Grattan Roberts, and photographer Bob Bateman. With the sun trying to make an appearance from behind the clouds the fleet could be seen heading for the turning mark of the Stags with fleet leader and winner of the previous two Figaro events, Yan Ellies, leading the pack. Then came the moment when the large shamrock on the spinnaker came into view reaching Ireland’s shore and then the mainsail appeared wearing the proud Tricolour of Ireland Following this first sighting there was then a run of some fifteen miles to the great moment itself of rounding the Rock where spinnakers were gybed before heading off on the route back to Roscoff. It wasn’t long before the spinnakers were dropped as it was too shy. For the crew on the RIB and particularly for the Keneficks, it was a wonderful, emotional, and very proud experience of being Irish. 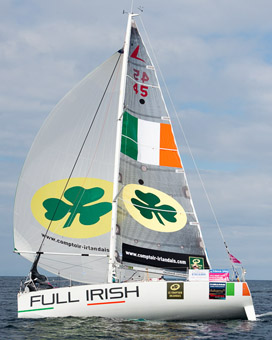