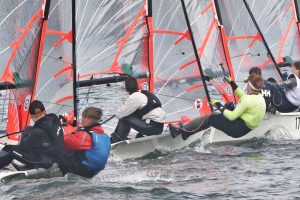 New Class Featured at the Royal Sprints Championship The 2018 Royal Sprints Championship was held last weekend at the Royal Cork Yacht Club. This first annual regatta attracted double-handed dinghy sailors ranging in age from 12 to 21 from all over the country including Cork, Kerry, Wexford, Baltimore, Dublin and Newcastle, Northern Ireland. The two-day 29er, RS 200 and RS Feva event featured short sprint-style races on a nested course. Cork Harbour served as the beautiful backdrop with brisk winds on Saturday at 14 with to 18 knots while Sunday calmer with winds 10 to 14 knots. The Royal Sprints Championship was the first of three regattas being held across Ireland to determine Ireland’s 29er Triple Crown winners. The 29er class’s first regatta of 2018 started with a thud(literally), the sound of one skiff’s long daggerboard hitting a now newly discovered sandbar. The resulting pitchpole forced the retirement of Lola Kohl & Johnny Durcan’s skiff and a race course move. Once adjustments were made, the 29er fleet successfully completed 10 races during the 24-hour period.Atlee Kohl & Chris Bateman earned first with strait bullets followed by Dawson Kohl & Chris McDonnell in second, Rory O’Sullivan & Rob Keal in third, Adam Doyle & David Jones in forth and Erin McIlwaine & Dan Thompson in fifth. The Triple Crown series highlights Ireland’s top 29er helms and crews. The next Triple Crown event will be held at the Royal North of Ireland Yacht Club followed by the final event at Dublin’s Royal St. George Yacht Club. The 29er class has been embraced by serious sailors with the winners of this year’s 4.7 Laser Nationals and Topper Nationals competing for the Triple Crown last weekend.

With the introduction of highly advanced youth skiffs like the 29er, the need for new and innovative safety practices is paramount. A new safety measure implemented at this event was the use of a ‘rescue sailor’. A rescue sailor is a fully proficient wetsuited individual ready to step onto a struggling skiff in a moments notice. At this event, the rescue sailor swapped places with an exhausted crew to get a struggling skiff into port on Saturday and helped a couple novice teams with on-the-water spinnaker issues on Sunday. Having an experienced sailor on standby to jump onboard a distressed dinghy really improves fleet safety by keeping RIBS on the race course, coaches dry and sailors happily competitive on the water. 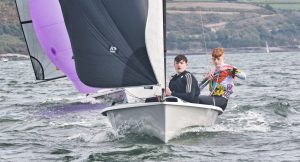 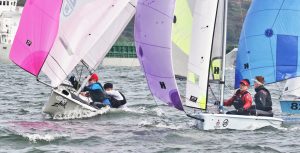 The RS Fevas battled it out over twelve races, the most of any class. In the end, Harry Pritchard & Neil O’Leary came in first followed by Elysia O’Leary & Lily Dwyer in second and Griff Kelleher & Kate Neville in third. Congratulations to all the sailors who fought challenging conditions and gave up some study time to be on the water competing with their friends in their favourite double-handed sailing class. Last weekend was a major milestone for the 29er fleet as it marked the first official event for the newly formed Irish 29er Class Association. The new association, spearheaded by Jarlath O’Leary, represents 29er sailors from all parts of the island of Ireland. If current participation is any indication, the future of the 29er program and its position as a feeder of great sailors into 49er program looks very promising for Ireland! A special thanks to Simon McIlwaine for his on-the-water photography expertise.