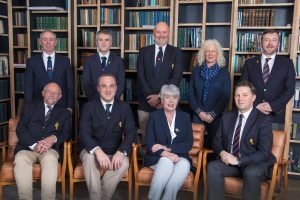 By office on January 18, 2023 in Latest, Uncategorized

The 302nd AGM of the Club was held on Monday night at the Clubhouse, it was great to be back to an in person meeting as the last couple of AGM’s have been online.

The 2023 Executive Committee was elected with the one change being Yvonne Durcan replacing Alex Barry in the role of the Chair of Membership, Communications & Events. Alex has done a fantastic job in this role over the last few years, with the highlight being his Chairmanship of the 505 World Championships in August 2022. Yvonne comes into the position with great enthusiasm and has some fantastic ideas for 2023. 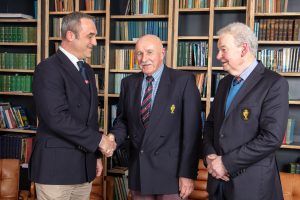 The highlight of the evening was when former Admiral Peter Crowley was proposed for Honorary Membership by another former Admiral, Dave O’Brien in recognition of his service to the club and to the sport of sailing, the proposal was seconded by Alex Barry and approved unanimously by the members present as Peter Crowley accepted the honour.

Peter Crowley is well known and respected throughout sailing and marine circles around the country and abroad, he is a former President of Irish Sailing and is a Vice President of the RNLI.