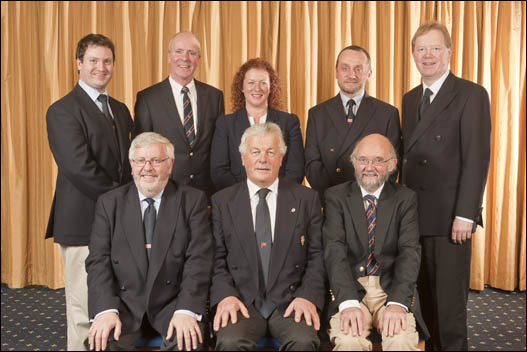 The 291st AGM of the Royal Cork Yacht Club took place on Monday January 16th at the Club  and attracted an overflow attendance. Outgoing Admiral Paddy McGlade took   the attendance through the business of the meeting prior to the election of the new Admiral and his Committee.  Before proceeding with the election of  the Admiral and Officers the outgoing Admiral expressed his thanks to all those who had helped him throughout his term of office and gave particular thanks to his wife Olga for her tremendous support and assistance.

The election of the new committee then took place with Peter Deasy elected to the role of RCYC Admiral to the good wishes of the capacity attendance. Pat Lyons will serve as Vice Admiral and Pat Harte will fill the role of  Hon. Secretary/ Treasurer.  Ronan Enright remains as Rear Admiral Keelboats, with John Roche becoming Rear Admiral Cruising and Darren O’Keeffe Rear Admiral Dinghies. Yvonne Durkan will chair the Bar House and Catering Committee and Cathal Conlon wll chair the Marina and Facilities  Committee.