By Bob Bateman on October 7, 2013 in Latest, Uncategorized 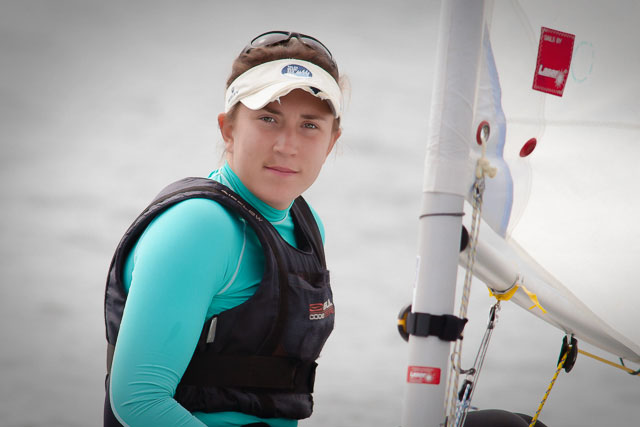 At the Laser Radial Worlds that finished to day at Rizhao City, China, Annalise Murphy finished with a placing of 23rd. With the exception of Qualifiers 3 and 4 which had some better wind, she had been struggling throughout the competition with light winds and swells. The light steady breeze of between 6 to 8 knots coupled with the swell and waves did not suit her as her optimum conditions would appear to be a blow or flat light conditions

The results certainly turned up an interesting scenario which a world championships have a habit of doing as it is open to the top competitors from all over the world who qualify. It is reckoned by a lot of people to be more of a test of a sailor in a particular class rather then an Olympic competition narrowed down to such a small number.    For example, in the prestigious Star Class it has often been said that the Star Worlds was a better event to win rather than an Olympic Star competition.

Tina Mihelic of Croatia took first place with a very consistent level of scoring to finish on 39 points. One of the rapidly rising Tekanen sisters of Finland, Tuula, took second with a score line that included three firsts and two seconds to give her a finish of 43 points and a previous gold winner Paige Railey of the USA also included three firsts in her score and finished on 58 points. Dong Shuang of the host club finished fourth on 61 points.  One of the favoured top guns Evi Van Acker of Belgium finished eighth on on 94 points, and Weymouth Gold Medalist Lijia Xu of China finished ninth also on 94 points.

Finishing outside the top ten were Marit Bouwmeester of Holland in 16th place on 123 points, Alison Young GBR  17th on 127 points, and Annalise Murphy IRL 23rd on 156 points.

Murphy will compete in up to six major regattas in 2014 but the main focus will be the ISAF World Championship that will take place in Santander, Spain next September.  This will be the first opportunity to qualify for the 2016 Olympic competition.

With all the very talented young sailors now appearing on the scene in the Laser Radial Class, as was evidenced by the Worlds in Rizhao City, it is obvious there is no time for complacency and strong programmes will have to be ongoing to  keep up with the new talents and paces emerging to cope with whatever weather conditions will be anticipated at any event.