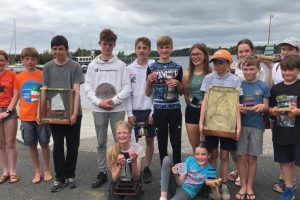 By Communications on August 24, 2021 in Latest, Optimist

The 2021 Optimist National Championships took place at Lough Derg Yacht Club, Dromineer, Co. Tipperary from Thursday August 19th to Sunday August 22nd.  Seventeen of our Optimist fleet (8 Seniors, 7 Juniors and 2 Regatta) took part in the event along with 119 other sailors.  Main fleet sailors competed in 11 races over their 4-day event with Regatta Fleet competing in 7 races over Saturday and Sunday.

The Championship was a generally light wind event with main fleet racing postponements on the mornings of days 1 and 3.   The breeze was known to change from 14 to 4 knots over the course of a race and sailors found themselves having to adapt to challenging wind shifts.

RCYC’s Oisin Pierse led the event by the end of day 2 (and had the most 1sts of Seniors) but by the end of day 4, RStGYC’s Caoilinn Geraghty-McDonnell secured the top prize with Oisin finishing 3rd (and 3rd Senior Gold).  JP Curtin, Harry Moynan and Joseph O’Leary finished 8th, 10th and 11th respectively. Isha Duggan finished 15th, with Caoimhe Corkery in 22nd (and 5th Senior Silver), Ellen Bruen 23rd and Ethel Bateman in 28th. 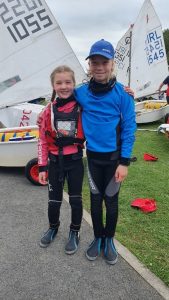 Laylah and Corey Browne at their first IODAI event

Well done to all our sailors; you worked hard in demanding conditions; there were highs and lows but what was constant was the tireless support and friendship between you.

Thank you to coaches Ben and Frances for their valuable and valued encouragement, attention, and guidance to the sailors.  Their energy, and enthusiasm to help, seemed endless.

Thank you to all the RCYC parents involved, to LDYC for hosting, and to IODAI for co-ordinating.

Two of our sailors turn 15 this year: we bid farewell to JP, for whom the Nationals was his last Oppie event.  Harry will also be finishing with the fleet this year and we wish them both every success as they move on from Oppies.