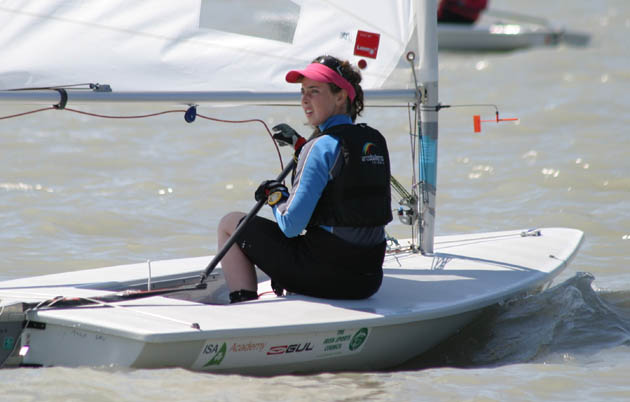 The first ISAF Olympic Qualifier Event of 2014 has finished at Miami, Florida.  Taking the first three slots in the Laser Radial Class in what was one of the most  frustrating weather events your scribe has ever followed at this venue, Paige Railey, USA took first place overall followed by Marit Bouwmeester NED  second overall and gold winner in the medal race and in third place overall Denmark’s Anne-Marie Rindom.   The weather was most disobliging and on this occasion did not suit the Current Laser Radial European Champion, Ireland’s Annalise Murphy who finished 32nd over all in the 51 boat fleet.   16 year old Sorcha Ní Shuilleabháin of Kinsale Yacht Club experienced her first ISAF Gold Cup sailing  event in these tough conditions achieving a 45th position and managing to finish ahead of Murphy in races one and three, a magnificent start at this level of sailing amongst Olympic and World Champions.  Sorcha was most vociferous in her praise of Annalise for the generous help and advice she gave her throughout the event.

Meanwhile Caroline Forde reports from Kinsale Yacht Club on the ASM Frostbite Series 2014 at Kinsale Yacht Club where Billy Duane RCYC leads the Laser 4.7 fleet with Luke McGrath also RCYC in third place overall.:  Conditions were described as exhilarating, varying and challenging with race officers reporting winds of between 3 and 25 knots at different stages. The windward mark under Moneypoint proved very problematic with little or no wind to round the mark.  The gusts proved too hard for many of the 4.7 and Radial Lasers with numerous retirees and no shows. However the Squib fleet and the Full Laser Fleet embraced the challenging conditions to hotly contest race placings.

At the end of the days racing in the Squib fleet, Allegro (Colm Dunne & Rob Gill ) were placed first on 8 points with Lazurus (Colm Daly & Marcus Hutchinson) following closely with 11 points. KYC Commodore Finbarr O’Regan and his son Colm were lying third in their squib Fagin on 18 points.