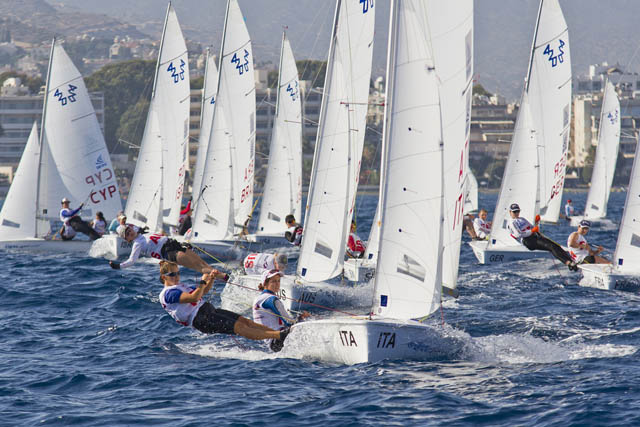 Often referred to as the Olympics of youth sailing, the ISAF Youth Sailing World Championships got under way in Limassol, Cyprus today. Temperatures of between 33-34 degrees along with high humidity at 70-85% greeted the eight ISA Performance youth sailors as they prepared for racing in a south-easterly breeze of 4-6 knots, picking up to 10 knots in the afternoon with gusts up to 16 knots.  The team of five boys and three girls will compete against 351 sailors from 61 nations across three different classes, sailing 2-3 races per day until the final race on Friday. Only one male and one female place was offered in each class and the contenders had to meet both international standards as well as win their category at the ISA Youth National Championships in April in order to be selected.

In todays racing the Kinsale/Royal Cork Duo of Clíodhna Ní Shuilleabháin and Jill McGinley finished 16th counting a 16, 20 and 12  from 27 competitors.

Kicking off in Balatonfured, Hungary tomorrow (Tuesday July 16th) will be the U21 Laser Standard World Championships. There the three-man ISA Performance youth squad will compete against the world’s up and coming Olympic hopefuls, some of whom are campaigning for Rio 2016, for six days until Sunday, July 21st. Then on Wednesday, July 17th the IODAI Worlds Team of five Irish sailors will join almost 250 other sailors from 54 countries for the Optimist World Championships on Lake Garda, Italy. Racing will continue for them until Thursday July 25th with a rest day in between.

Commenting on the busy line up ISA Performance Director James O’Callaghan remarked “It’s fantastic to see so many of our young sailors competing at the highest level across Europe. These are all important events in the ISA Pathway programme for the sailors development“.